You Want Me to Do What? Put My Dog in a Crate? How Cruel! Cruel? No. 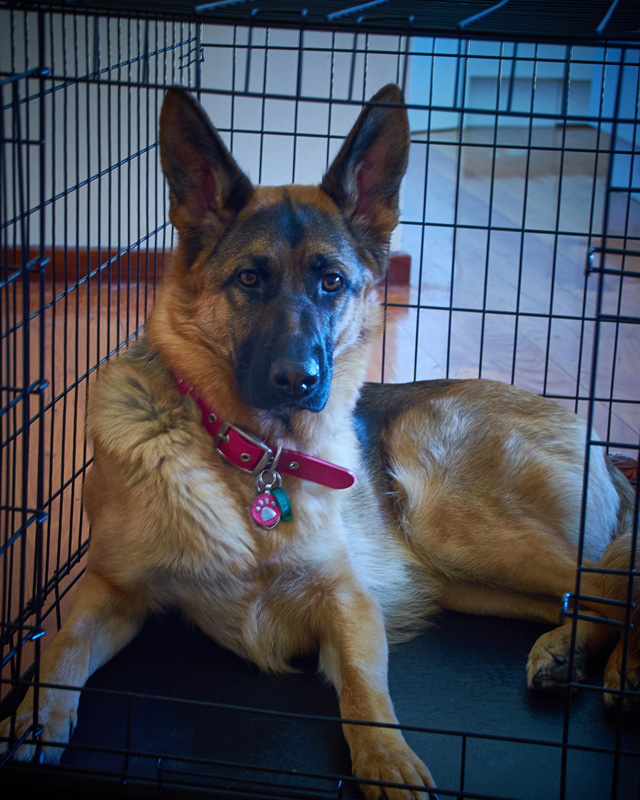 Done properly, crate training can be the answer to many problems faced by dogs and their owners.

First, what is a crate? The answer is simply that a crate is an indoor dog house-Just big enough for him to stand up, lie down and turn around in, placed in a much used area of the house such as the living room or kitchen. It must be a plastic airline type crate. It is a place for the dog to be when no one is around to make sure that he is staying out of trouble. It is the dog’s “space” in the house. It is his bed and his sanctuary, it is his. Many people crate train their dog for the simple reason that the dog can do no wrong while he is in his crate. He can’t piddle on the rug, chew on furniture or eat the kids hamster.

He sleeps-and while he sleeps, the owner can go shopping, visit friends, run errands, or take in a movie and not have to worry about what kind of shape the house is going to be in when they home. They put the dog in his crate, shut the door and leave for few hours, knowing that when they return it will be a Happy Dog/Owner Reunion and not a one-sided yelling match with the dog!!!

Most dog’s love their crates. It is their space in the house. Wild dogs, coyotes and wolves all “den”. This means they find a small cave or dig one themselves and this is where they sleep, rest and just “hang out”. It is home. Providing your dog with a crate satisfies his desire to den. No one is going to yell at him for doing something wrong; he can’t do anything wrong while he is in his crate. No one is going to step on his tail, trip over him or pull his ears. It is easier to teach small children to stay away from the dog while he is in his crate than it is for you to yell “leave the dog alone”.

But won’t he get terribly bored, being locked up? No, he’ll just to sleep. A dog will sleep eighteen hours a day if you let him. And remember, dog’s version of “recreation” while the owner is away often involves destroying the house. Also, it’s not as if he must remain in his crate for the rest of his life. Just until he gets over the destructive period all dogs go through when they are young. Or if it’s an older dog in a new home, just until you, as the owner, feel safe leaving him alone in the house unconfined.

Many dogs form habits, such as house soiling, that can be easily broken by crate training. If a dog has formed the habit of urinating or defecating in the house wherever and whenever he feels like it, the crate training can teach the dog control. A normal healthy dog will not urinate or defecate in his crate. To do so would mean he would have to lay in it. Most dogs prefer to wait until the owner returns to let them out.

What size should I get?

It jut depends on the size of the dog and where you purchase the crate. Just remember though, a crate is something a dog will have for the rest of his life. It’s bed, his room, his space in the house. A good crate will last much longer than the dog, so don’t worry about wearing it out! And also compare the initial cost of a crate with the cost of destructive behavior.

What about puppies—I don’t want to keep buying crates as the pup gets bigger. Right. You should guestimate what size your puppy will be as an adult dog and buy a crate that will be big enough for him as an adult dog. Then you put cement blocks in one end of the crate to make space inside the crate for smaller. As the puppy grows, remove the blocks to adjust to the correct size.

At first, most dogs resent being confined, however given some time to adjust, your dog will soon learn to love his crate and the security and privacy that goes with it.

Let’s say you have a new puppy. The puppy is 8 weeks old and cannot be expected to go for long periods of time without having to relieve himself. The method of crate training an 8 to 12 week old puppy is as follows:

Adjust to the correct size with the blocks in the crate to allow the puppy only enough room to lie down and turn around. A blanket or towel can be placed in the crate as the puppy’s bed.

As the puppy approaches four months of age he can be expected to “hold it” longer. A four month old puppy can usually spend an entire night without having to relieve himself; as long as he did his business right before going to bed! Be sure he relieves himself before you shut him in. It also helps to remove their food and water in late afternoon. Most puppies that have had access to their crates from the beginning have no complaints. The first time they are shut in they may cry a little but ignore them and soon they will give up and go to sleep.

Do not let the puppy out when he is crying: if you do, you have just taught the puppy he can get his way by being vocal. Always wait until the puppy is quiet before you let him out of his crate. The expectation is when you first get home after the puppy has been left in his crate for a while. The excitement of your return will probably make your puppy need to relieve himself and you should IMMEDIATELY go to his crate and let him outside. Take him directly to his designated area outside and praise him wildly when he relieves himself there.

The same is true for the first thing in the morning. The puppy’s crying probably means he needs to relieve himself and he doesn’t want to soil his sleeping quarters. Take him out IMMEDIATELY, puppies five months and older can be trained the same way as an adult dog.

Although crate training the adult dog is not as easy as with a little puppy, it can still be done with less hassle than would be expected. As mentioned earlier, most dogs resent being confined at first but soon learn to love and enjoy the security their crate provides.

Patience and Persistence, are the only requirements to begin crate training an adult dog. The first step is to let the dog investigate his new crate. Throw his toys in and then invite him to play fetch. Keep throwing the toys inside until he no longer fears the crate. If your dog isn’t interested in toys, try food. If he wants to eat-he’ll have to enter the crate to dine. Don’t shut the door until he shows no fear of being inside. This can take anywhere from a few minutes to a few days.

The next step is to form a command that you will use consistently when you want the dog to enter the crate. “Bedtime” “Go in your Crate” “In Your Kennel”, will work fine. Use only one command and use it consistently. Bring the dog to his new crate, point inside and give the command, if he goes in, fine: shut the door. Do not trick the dog into going in and then slam the door on him. This is not fair and will not build trust between the dog and the owner.

Use the command, if the dog refuses to go in, fold him up and roll him in. Close the door. Do not leave; stay there a few minutes. This is where the patience is important. The dog will probably cry, scream, yodel, yelp and bark to be let out. Don’t give in. When he is quiet for a few minutes, let him out. Praise him wildly, give him a bit of something he likes to eat and then repeat the command for him to go in his crate. This time he will probably take one look at you and try to head for the hills. Don’t let him, fold him up again and roll him in; push him in or shove him in but get him in that crate. Close the door, keep repeating these steps until the dog will enter the crate on your command because he knows he has no other choice. Don’t Give Up. this is where the persistence comes in.

Crate training the adult dog can take anywhere from 30 minutes to a week. Just remember, the more consistent, firm and unyielding to his complaints you are, the faster he will crate train. Now that he will enter his crate on your command, its time to start leaving him for short periods of time while you remain in the house. Leave him for an hour or two inside his crate while you watch T.V. or clean the house. Let him feel secure that he will not be left in there forever., that will be let out eventually and that you are not going to go away and forget him. Once he feels secure in his crate you can leave him for longer periods of time while you are away from the house. Always make sure he has gone to the bathroom before placing him in his crate. 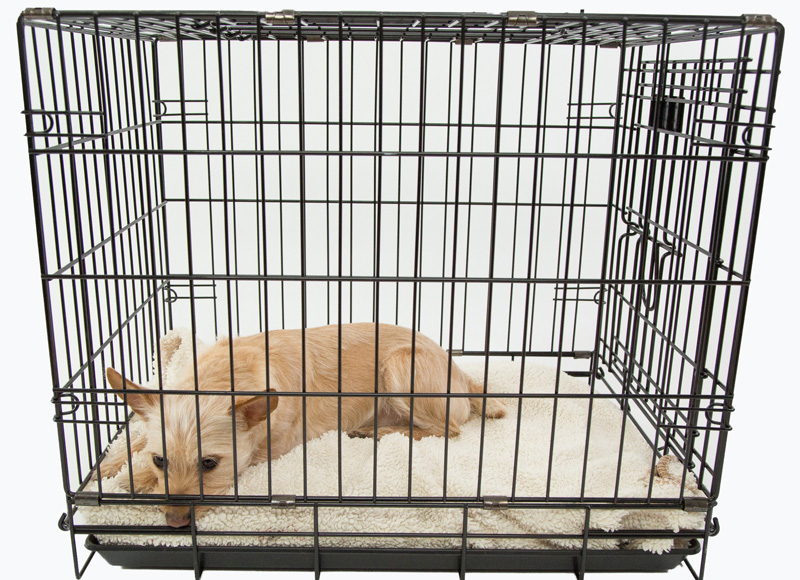 It sounds like a crate is pretty handy thing to have around. What are some of the other advantages to having a crate trained dog…besides the housebreaking part?

Well, a dog that feels secure in his crate is much easier to take on long trips than a dog that is left to jump excitedly around inside the car. And dogs being shipped via plane or train feel much more secure and can handle the stress of traveling much easier if they have their own crate to travel in. Crates take the worry out of leaving your dog in a motel, or hotel while you see the sites—the maid isn’t likely to accidentally let the dog loose into the streets of a strange city if you leave your pet in his crate while you are away.

OK, it sounds like crate training is an excellent idea—but tell me, should everyone crate train their dogs?

Not necessarily, but if you are considering crate training as a method of housebreaking, you should as yourself these questions:

If you answered yes to any of these questions then perhaps you should think more seriously about crate training. Even if you have none of these problems, crate training is a nice thing to do for your pet. Dogs do love their crates!!!

So give it a try. You have nothing to lose and everything to gain… Crate Training….Our approach to housebreaking.